For this semester seven courses are launched. Scholarship awardees are expected to take two available courses. The courses are the following:

This course focuses on an improvement of gramar and writing. The class will be conducted 70 % in English and 30 % Indonesian, which is supported with online tutorial (watch an example of english tutorial). After the course, students are expected to confidently write his/her own diary and speak in English with his/her colleagues.
Students will be introduced to the French language. They will be enganged with Grace Dina whose experiences in teaching French for more than 5 years. She had lived in Orlean France for two years, taught French in Bandung Indepedent School and has privately taught students.
Students will be introduced to the German language and cultures.
Students will be introduced the logical math which trains them to express natural and social phenomena in a logical-math language. The course will be given by a talented researcher whose more than five-year experiences in this field.
The basic of Arabic fusah will be taught.
The basic of Japanese language will be taught.
Students will learn physics by animated simulations. They will also be introduced how to simulate physical phenomena using programming languages.

Grace has a degree in French literature from University of Padjadjaran, Sumedang, Indonesia. She also studied in Orleans, France for c.a. two years and worked as a French teaching assistant at Bandung Independent School, Bandung, Indonesia. After working as the teaching assistant for 4 years, Grace moved to Dresden and works there as a private teacher of French and English languages.

Ika has a degree in German literature and education from State University of Malang, Malang, Indonesia. Afterwards she had worked as German lecturer at Trisakti Institute of Tourism in Jakarta for five years. In 2013 she was offered DAAD scholarship by German government to pursue master studies at Technische Universität Dresden. She earned a master degree in 2015 and works as a teacher in Dresden until now. 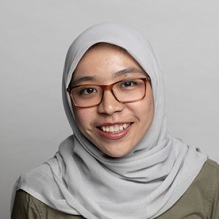 Eva Afifah completed her bachelor of design in Institut Teknologi Bandung. In 2018, she obtained an MA in Graphic communication design from University of the Arts London. She founded Esstisch Studio in 2019. 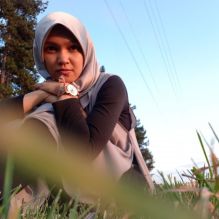 Risva has a degree in German literature and education from Indonesia University of Education, Bandung, Indonesia. Afterwards she pursued her dream by doing master studies at Universität Trier. She earned a master degree in 2017 and works as a teacher in DLA Goethe Institut.